Designed for quick draws and fast firing, the N-Strike Elite Strongarm blaster puts elite battle performance in the palm of your hand. When speed and mobility are essential, this is the ultimate blaster. The rotating barrel holds 6 darts and the Slam Fire slide lets you blast as fast as you can fire. 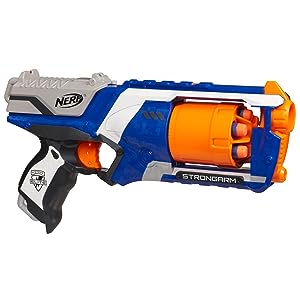 Join the Elite
N-Strike Elite blasters are the ultimate in blaster performance. Featuring upgraded distance and the revolutionary Elite Dart, this is the final word in today''s blaster technology. With the power of an N-Strike Elite blaster in your hands, you can fire further than ever before - up to 75 feet! Each N-Strike Elite blaster is engineered with amped-up velocity. That means your N-Strike Elite Darts maintain accuracy and flight stability, even at extended distances. Choose your blaster and join the Eilte!
6-dart Slam Fire blasting
Fast-firing and easy to reload, the Strongarm blaster is made for speed and mobility in battle. Flip open the rotating barrel and easily load the 6 Elite Darts. Flip the barrel shut and you’re ready to blast. You have total control over your rate of fire with the Slam Fire slide. Unleash a stream of darts by holding down the trigger and pumping the Slam Fire slide rapidly back and forth. Revolutionary Elite Darts fly up to 75 feet! When it’s time to reload, the barrel flips open so you can get back in the battle fast.
Rotating auto-advance barrel
The Strongarm blaster features N-Strike Elite power, which can launch an Elite Dart up to 75 feet. The rotating auto-advance barrel flips open for easy loading and holds 6 darts, giving you rapid-fire ability in battle. Use the Tactical Rail to customize your blaster with any Tactical Rail accessory (each sold separately).
Includes
Strongarm blaster, 6 Elite Darts and instructions.

Nerf and all related properties are trademarks of Hasbro.

Corporate Social Responsibility: Hasbro is committed to being an ethical and responsible company and is a recognized toy industry leader in the areas of product safety, environmental sustainability, ethical sourcing and philanthropy.
Speed and mobility are yours with the quick-draw fast firing of the Strongarm blaster! It has the same long-range power as other N-Strike Elite blasters (sold separately), firing the 6 Elite Darts up to 90 feet. Hold the trigger down and pump the Slam Fire handle repeatedly to rapid-fire all 6 of your darts at your target! Loading is easy and quick with the flip-open rotating barrel, and you can attach most N-Strike accessories (sold separately) to the blaster's Tactical Rail for even more battle advantage. Add the Strongarm blaster to your arsenal and unleash a storm of darts at your target! Nerf and all related characters are trademarks of Hasbro.

Color:White
Product Description
Fire 6 darts in a row from the quick draw, fast firing Nerf Strongam blaster! When speed and mobility are essential, bring this N Strike Elite toy blaster into Nerf battles. Take aim at targets with this blaster that shoots darts up to 90 feet (27 meters) away. The barrel flips open to the side of the blaster for easy loading and holds up to 6 Nerf Elite darts, so you can fire 6 darts before it’s time to reload. The Strongarm Nerf blaster has slam fire action to rapid fire all 6 darts in a fast, frenzied wave of foam! It comes with 6 Official Nerf Elite darts that are designed for distance, tested and approved for performance and quality, and constructed of foam with flexible, hollow tips. You’re in control of the action as you move the slide to prime the blaster and pull the trigger to fire. No batteries required. It’s a great gift for Nerf newbies and a cool blaster for Nerf fans to add to their collection! Nerf and all related properties are trademarks of Hasbro. Motorized Speed Load Technology automatically loads darts into the drum
From the Manufacturer
Speed and mobility are yours with the quick draws and fast firing of the Strongarm blaster. It has the same long-range power as other N-Strike Elite blasters (sold separately) and it rapid-fires 6 darts when you pump the Slam Fire slide repeatedly while holding the trigger. Loading is easy and quick with the flip-open rotating barrel and its Tactical Rail is compatible with most N-Strike accessories (sold separately). Add the Strong arm blaster to your arsenal and unleash a storm of darts at your target.